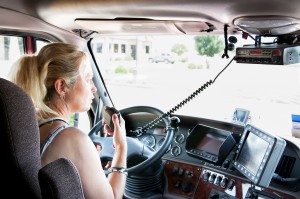 Commercial motor vehicle (CMV) operators can have a dramatic impact on vehicle efficiency and overall fuel consumption. The skill with which a driver controls a vehicle, the frequency of idling and average vehicle speed all play a role in how efficiently a vehicle is operated.  A 2016 ATRI study found “eco-driving” training or coaching for drivers was currently used by more than half of the fleets that participated in the study and was the second most mentioned fuel-saving strategy being considered for deployment in the next year. [60a]

Research has shown that carriers can improve fleet fuel economy by training drivers to operate vehicles more efficiently. Drivers play a key role in obtaining the best possible fuel economy from their trucks since they control factors such as idle time, brake use, vehicle speed, and route selection. For example, a report completed by the American Trucking Associations’ (ATA) Technology and Maintenance Council found a 35 percent difference between the most and least efficient drivers.[61] According to this report, the most fuel efficient drivers were consistently found to:

Drivers can also influence fuel consumption through appropriate route selection and by ensuring proper tire pressure. Drivers and/or dispatchers should take geography, weather and regional considerations into account when determining a route or setting a schedule.  As shown in Figure 2a, weather and routing account for nearly one-third of the factors affecting fuel economy while the driver and vehicle account for the other two-thirds. Training drivers to simply drive with the flow of traffic (to reduce hard braking and sudden accelerations) has been shown to improve fuel economy between 5 and 20 percent.[62]

To develop the skills necessary for improving vehicle fuel efficiency, fleets may opt to use a variety of training techniques including classroom, online, in-cab and/or driving simulator-based programs. For example, Schneider National conducted a study on its own fleet (12,000 drivers) and determined that the safer a driver the better their fuel economy.[65] Further the carrier indicated that training is not a “one-size-fits-all” solution therefore they offer a variety of training options to their drivers such as online and in-cab training, driver management systems, driver monitoring and in-person coaching. For online training, Schneider National has enrolled their drivers in a fuel management course which offers training on a variety of skills and techniques such as idling, progressive shifting and situational driving.

Strayer and Drews studied the fuel efficiency of drivers before and after simulator training that focused on optimizing shifting practices and techniques.[66] The researchers found that after a two-hour training course, study participants were able to increase fuel economy by an average of 2.8 percent. Using this average, if a vehicle consumes $75,000 of diesel annually under normal operating conditions, this two-hour training course could result in a $2,100 savings per year per driver.

Research sponsored by the Federal Motor Carrier Safety Administration (FMCSA) reported that driving simulators typically cost $125,000 to $290,000, depending on the model and vehicle configuration used.[67] Based on this initial equipment price and factoring in a service life of 15 years and typical maintenance, the price of simulator training can therefore range between $3.37 and $5.07 per student per hour.[68] It should be noted however, that there are industry vendors that offer mobile simulator classrooms, which can reduce simulator training costs.

In another study, Symmons and Rose examined the influence of classroom training on truck driver behaviors related to fuel consumption in Australia.[69] Participants in this study drove a cement truck on an on-road test track (approximately 30 kilometers or 19 miles) in which their fuel consumption, completion duration, gear changes and brake applications were measured. Twelve participants were randomly assigned to one of three conditions:

In another example, the Upstate Niagara Cooperative deployed a hybrid training program which consisted of in-cab coaching (via telematics), classroom instruction and targeted training of poor performers to overcome the issue of fuel inefficiencies.[70] The in-cab telematics provided both the driver and their supervisor with information on the driver’s driving habits such as fuel efficiency or shifting patterns; in addition the system would alert the driver when they engaged in inefficient driving behaviors. In the first three months since Upstate Niagara Cooperative deployed the in-cab coaching, seven out of 10 trucks demonstrated marked improvement. Prior to the coaching, the average fuel economy was 5.81 miles-per-gallon (mpg), post-coaching the average fuel economy increased to 6.10 mpg.[71]

While the fleet managers did not specifically address fuel economy during the driver coaching sessions in Stage 4 or 5, the researchers indicated that fuel economy could be increased via the safety coaching and alerts the drivers received because behaviors such as excessive speeding or harsh accelerations can reduce fuel efficiency. Therefore, the researchers hypothesized that driver monitoring and coaching would help to improve fuel economy. Results from the analyses indicated that drivers in the pilot day cab group had an average baseline fuel economy of 7.07 mpg while at Stage 5 (monetary incentives) these drivers had an average fuel economy of 7.77 mpg.

Likewise, drivers in the pilot sleeper cab group had an average baseline fuel economy of 7.04 mpg while at Stage 5 these drivers had an average fuel economy of 7.42 mpg. The researchers concluded that for the duration of the study the coaching, in-cab alerts and incentives were effective in increasing fuel economy across both the pilot day and sleeper cab groups however additional research should be completed to determine the lasting effects of these interventions to a period of 30 to 60 months post-intervention.[73]

Trucking companies may also offer fuel bonus programs to drivers, which incentivizes fuel conservation. Such programs typically pay drivers on a per mile basis if a certain fuel economy is reached over the course of a month. For example, Nussbaum Transportation deployed technology to measure and collect driver data metrics related to fuel efficiency which are then used to calculate a driver fuel scorecard.[74] The driver fuel scorecard is used to determine if a driver has exceeded the fleet’s mpg goal which then assigns a driver one point for every 0.01 mpg exceeded. Drivers are then presented with monetary awards based on the number of points they have accumulated and according to a predefined three-tier bonus system:

As an alternative to the three-tier system, Nussbaum Transportation awards drivers up to $0.05 per mile for every point earned.[75]

The aforementioned research findings and carrier practices demonstrate that increases in fuel efficiency can be achieved through a variety of training methods, driver monitoring and use of incentives. In addition to increased fuel efficiency, each of these training methods may also increase driver safety behaviors which further contribute to the sustainability of the trucking industry.
[Back to top] 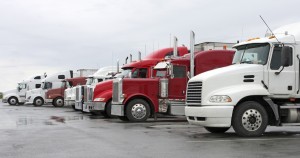 Another way that drivers can improve fuel efficiency is by limiting the amount of time spent idling. Drivers idle their truck engines for a variety of reasons including to power in-cab accessories, provide heating or air conditioning, and to ensure that the engine fuel and oil remain warm in cold weather conditions. Past research has estimated that an idling truck consumes approximately 1 gallon of fuel per hour and increases both air and noise pollution.[78] It has been estimated that more than 6 billion gallons of gasoline and diesel are cumulatively lost to idling every year[79] There are currently a wide variety of idle reduction devices on the market including:

In addition to these idle-reduction technologies, educating drivers about the impacts and adverse effects of long-duration idling can help reduce time spent idling as can offering financial incentives. Some state, city and local governments are also attempting to minimize idling by offering incentive funding to help offset the cost of purchasing idle reduction technologies.[88] A number of jurisdictions have also promulgated laws that limit the length of time an engine can idle. As these regulations vary widely, a compendium of idling regulations has been compiled by the American Transportation Research Institute (ATRI).[89]
[Back to top]

The travel rate at which drivers operate their vehicles is another key factor in improving fuel efficiency. While every vehicle reaches its optimal fuel economy at a different speed, fuel economy typically decreases rapidly at speeds above 50 to 55 miles per hour (mph). For example, when compared to 75 mph, traveling at 55 mph saved 28 percent more fuel while driving at 65 mph saved 15 percent more fuel. And while lower speeds do increase travel times, maintaining a 65 mph speed increases travel times just 15.5 percent.[90]

Individual carriers can lower the 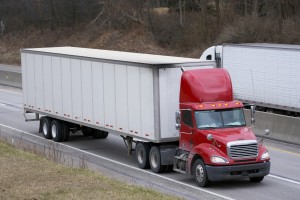 maximum speeds of their entire fleet through the use of speed limiters (also known as speed governors) which are devices that interact with the engine to prevent the truck from exceeding a pre-defined speed. Since speed governors have been installed on all large truck engines manufactured after 1992, carriers, in many cases, simply have to activate the devices and incur no additional cost.  An ATRI study found speed limiters to be one of the top fuel-saving technologies currently being employed by fleets. [91]

An assessment performed by Transport Canada found that a national speed limiter mandate of 105 kilometers per hour (65 mph) could save Canadian carriers up to C$200 million ($184 million U.S.) annually through reduced fuel consumption.[93] As noted, limiting fleet speed can be a low or no-cost fuel-saving strategy for carriers since the majority of large truck engines have these devices installed but not activated.

Operating vehicles at consistent speeds also improves fuel efficiency. An analysis performed by ATRI evaluated the potential fuel consumption and emissions impacts of operating a vehicle on two roughly parallel routes of approximately 70 miles in Maine.[94] One route was a state highway that had several signalized intersections. The second route was an interstate highway that had no stop lights but was approximately 5 miles longer. Despite the longer travel distance of the second route, total fuel consumption was found to be an average of 1 to 2 gallons less compared to the state highway route. While this particular study modeled a higher productivity vehicle (at a gross vehicle weight of 100,000 pounds); these findings support the importance of maintaining a consistent speed in order to improve fuel efficiency.
[Back to top]